LAST CHANCE TO BOOK FOR THE TA EAST LUNCH!
Well nearly – our excellent organiser Geoff Morse wouldn’t turn you away if you arrived on the day unannounced – but much better pick up the phone, dial 01787 375983 and book yourself(s) in. It’s on Sunday (4th Feb) at the Manger, Bradfield Combust, and costs just £10 a head – and it’s not “Economy Class” either, there’s a proper 3 course meal plus coffee, preceded by ample time top chat in the bar, all in a civilized ancient inn of quiet distinction.
APPETIZER RUN
The weather forecast looks hopeful, so you may want to join the Chairman on his Appetizer Run, which has a REVISED START – it is now 11am at or from “Sweetmeats” , a café in Water Street, just around the corner from The Swan Hotel in the centre of Lavenham. 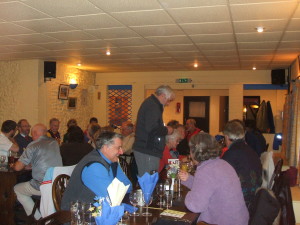 This will be a chance to meet and hear the new President of the TA, Bill Finch, who will propose the toast to our Region. Bill’s ability to turn ordinary Kentish cyclists (or should that be cyclists of Kent?) into tricyclists is amazing – I think West Suffolk Wheelers had 20 entries for their Ron Fisher Memorial 25 the year he got his CC Bexley trike mates to come up en-mass. Perhaps we should put up the now “resting” Ron Fisher Trophy for the best SE Region member in the Ixworth Crit.??? 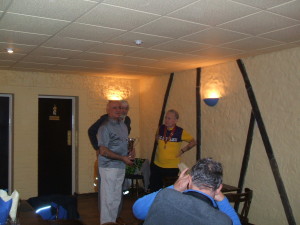 Does anyone know if Ron ever rode a Crit?
I’ve just been talking in the street to a chap riding a Dio Blasi FOLDING TRIKE Looked very similar to the Diablo machine which a Kings Lynn member had a few years ago – small wheeler, quite neat, but with thin sheet metal rather prominent in the construction – a bit of a Tri-ang look about it. Came from a business in Heacham called Wallis according to the frame sticker.
Last Saturday I rode my faithful old Phillips/Holdsworth conversion out to the 60TH WEDDING ANNIVERSARY of ALBERT & MARGARET SAUNDERS at Carbrooke. I’m told the old conversion proved a wonderful climbing frame for 5th generation Saunders’s – but the person who told me may just have been making a bid for the CC Breckland’s Stirrer of the Year wooden spoon award!
Albert & Margaret must be in the running for having organised more trike time trials than anyone else. I went equipped with notepad and pen to find out more, but in the midst of 70 odd admirers, this wasn’t ever going to be practical. Albert & Margaret aren’t able to be with us on Sunday, but they have faxed me a nice message to read out.
Our chairman had picture of this event on the homepage of the TA website within 24 hours – look at www.tricycleassociation.org.uk
OTHER NEWS OF MEMBERS: Gerry Lewis, our past Chairman is flying in from France to be with us at the EAST LUNCH
Adrian Hills will also be coming. Here is his news about the aftermath of the accident in the Jenny Noad 10:-
“Keith Lake, the man who ran Jill down, was convicted of Careless Driving on 17th of January. He was fined £750 and banned from driving for a year. Lake’s solicitor immediately appealed the ban, but this appeal was thrown out by the Magistrates. Lake’s solicitor will now be taking this appeal to the Crown Court. The Crown Prosecution Service have informed me that this was the minimum ban and that the Crown Court had the discretion to also increase the length of the ban !
Greta Spiers, Tricycle Association Captain, accompanied me on all three occasions that we had to turn up at the Magistrates Court in Stratford and I would here like to record my thanks for her support.
Jill is improving steadily and we will be moving to a converted bungalow in Essex in March.”
(In case you have not heard, last Friday the driver who fell asleep and mowed down Zak Carr was sent to prison for 5 years, disqualified for 7 – he faced strong evidence that he should have known he was too tired to drive safely)

It has been a shock to hear that Jim Staines has a serious heart problem. A contemporary of mine (that is around 63) – we raced together in the 60s on bikes, as well as much more recently on trikes. Jim has always known that heart problems run in his family, but he rode the 45 mile off-road Peddars Way as recently as November. “Beating weakly” is the simple description of the trouble now. He is being treated, but he and his wife Vera (TA National TT Sec 1992-2000) do not disguise that are advised that the future is very uncertain.

EAST ANGLIAN CYCLIST
Pat Payne (Mick Madgett’s aunt) recently gave me a complete set of this printed magazine which ran from Aug 1948 to Jan 1949. There, with the poem about the thrills of cycle speedway and the small-ad “4-10 folding shotgun wanted” one item caught my eye – J Lindsell and C Ketteridge of Cambridge Town & County CC, 5th in an Upton Manor tandem 30 in 1-6-56. Our member John Lindsell, now aged 85 and still in the same club, raced his trike last year, the oldest East Anglian VTTA rider to compete.- I hope he will see this and tell us more.

New WEBSITE
An e-mail so headed from my opposite number, Captain of the TA Thames Valley Simon Lambert, made me think the TA TV were launching a site. Actually it proved to be for Simon’s bespoke wood furniture business which is sprouting in the Chiltern beechwoods.
You still might like to have a look:-
www.furnivall-finecrafts.co.uk
Simon always did have very smart trikes.
Talking of the TA Thames Valley, I joined them for a Hostel Weekend at Blaxhall last summer and we were somewhat perplexed to find the pub, the famous singing inn “The Ship” closing about 10pm on Saturday. These unenthusiastic opening hours were mentioned when the owner’s plea to be allowed sell the building as a house was turned down by the local Planning Committee, today’s East Anglian Daily Times reports.
CAFÉ LIST
Tricycle owner Andy Hurrell has updated his useful lists of Cafes. One for Norfolk and one for Suffolk. E-mail him on Evahurrell@aol.com and he will gladly e-mail you one or both.

FORDS RUN
Now we have had a nice lot of rain to fill the rivers, our Fords Run on the last Saturday in February (24th) should be interesting, so please look out some old socks and join me on this ride which will start with a ride into Hadleigh along the cycle path on the high railway embankment.

Hope to see many of you both then and at the East Lunch this Sunday!