A Happy New Year to you all.

We are exactly a week away from our first meet of the year on SATURDAY 9TH JANUARY, the date of which was in the Autumn Gazette, but the venue was undecided.

It is now settled the Lunchtime Meet will be at THE MILL TAVERN, MARKET WESTON, which is on the BIIII, between Stanton and Garboldisham, and is about 10 miles west of Diss.

There will be a short clubrun beforehand, which will leave the ANGEL COFFEE BAR overlooking Fair Green, Diss at around 11am. More details near the end of this newsletter.

A week later a research group of members are heading into the Fens to investigate Whittlesey Straw Bear Festival, on the 15/16th/17th January. If you would like to join them, Mike Moody, 01945 861046, will tell you more. I believe the festival involves processions of traditional dancers and pubs. We may make more of this visit next year, depending on our researchers report.

Sadly HERBIE NEVILL who was the first chairman of the East Region after it was formed in February 1951, died last week, aged 93.

Herbie and his wife Joyce were regulars at the TA East Lunch until recently. And on these occasions Herbie would often bring me a carrier bag of papers – part of his cycling archive. So I can tell you with some confidence that Herbie joined the TA in 1946, because I have by my keyboard the letter the treasurer sent at the time.

It is from TA treasurer H E R T Carter, dated 14th September 1946, and begins
“Dear Mr Nevill I hear from Les Dawdry that you want to join our TA.”

There are lots of gaps in my information and I would welcome input from those who knew Herbie.

I know he was born in 1916, bought his first bicycle in 1930 and joined the Brantham & District Wheelers in 1932. This club eventually folded and he joined the Ipswich Bicycle Club in 1937.

He served in Egypt during the war and was proud of his association with the Buckshee Wheelers, club that raced in the desert.

As well as being a founder member of our Region, he called the1964 meeting that launched the East Anglian Group of the VTTA and served them in many capacities for 30 years or more, and initiated the Lawford Cyclists’ Carol Service.

It is clear that he put in a lot of miles, always riding from his home in Ipswich to his work in Manningtree, mostly on a tricycle, and his most notable time trial ride that I know about was a long distance one – 203mls 1500 yards in a TA 12 in 1957.

Do let me have your memories of Herbie.

THE FIRST PRANG OF THE YEAR?

He writes: “Tipped off the trike yesterday, turning, I thought gently, into my home road – front wheel must have hit a bumpy piece of ice while I had one arm out signalling a right turn and over I went – fortunately the cars were going very very slowly because of the ice, so I have just a bruised hip and a pain in the ribs – this was 10:45 on 01/01/2010, so may have been the first trike prang of the year!

I’d gone out to get a photo of my trike in the snow – only to find the snow was very local – all the fields were clear and what was on the road was more like very heavy frost – crunchy underwheel – so no photo either!”

Can anyone beat that? 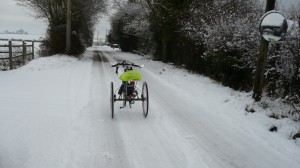 Webmaster’s note: Roy subsequently got out to take this photo.
More pictures in Trikes in the snow.

As usual it is on the first Sunday in February, which this year is SUNDAY FEBRUARY 7th.

We had a well-attended meet at the Viper, Mill Green, near Ingatestone in December. Sorry I missed the first half of the day, due to someone nicking the railway signal wires for scrap copper (it is thought). At least I have received a £13.20p voucher from the train company in compensation for the delay. See report on East News – Bite at the Viper.

We return to Essex on Saturday 20th February when we have a Chelmer Fords Run. Meet 10.30am at Paper Mill Lock Cafe, North Hill, Little Baddow CM3 4BS

On FRIDAY 16th APRIL we have a Lunchtime Meet at Edwardstone White Horse. (5mls east of Sudbury, Postcode CO10 5BX, Grid ref TL 951426) Note this is a FRIDAY

However, I hear that John Malseed has one for sale. It’s a Higgins conversion with a rear brake and single speed drive. Its 26” wheels are past their best, but the whole machine is ready to go. Currently fitted to a lady’s frame. Was supplied by Colchester West End Stores to a lady in West Mersea around 1960. John says “about £100 poundsworth” . His phone number – 01206 323334.

Finally – more details of our Meet on Sat 9th Jan:

Elevenses Meet is the Angel Cafe on the southern edge of Diss. It overlooks Fair Green and the address Lower Denmark Street.Grid Ref TM 113796.

If heading towards Thetford on the A1066, pass the bus station, go straight over at a mini-roundabout immediately afterwards turn left at a fish & chip shop.

Car parks – there is a car park just north of Madgetts Cycles on the road towards Shelfanger, or there should be plenty of room on Saturdays at Diss railway station.

Hope to see you there!