FRIDAY – The main message is that – as mentioned on p57 of the Winter TA Gazette – our next meet is not at the weekend but this Friday lunchtime at EDWARDSTONE WHITE HORSE, near Sudbury, that’s Friday 16th April. The reason for trying a weekday meet is to get away from crowded lunchtimes – but this has not entirely worked, as the pub is still asking for numbers.

So, if you are coming, please let me know by the end of Tuesday evening, as I have promised to give a figure. However I hope anyone who finds at the last minute that they can join us will do so.

I already have Martin Badham, Ian Charity, Geoff Morse and myself listed.

It helps that it is pretty much in the middle of the Region, but mainly because it felt so much in the right spirit when we had lunch there between fords last time we visited.

Since then they have built their own brewery on site –The Mill Green Brewery. The detailed series photos of the construction of this timber framed building on the Brewery section of the pub website is worth a look. There is also a lot about the brewery at a CAMRA webpage, “Think Green, Drink Green” at www.cambridge-camra.org.uk/ale/337/drink-green.html .

The White Horse has its own campsite with water for the showers heated by solar panel. There’s a wind generator and holiday cottages – see:

Edwardstone is about 5 miles due east of Sudbury. The pub is at Mill Green. It is not too easy to locate in a network of lanes, so give yourselves time to find it.

If the weather in the afternoon is half-decent it is likely that I will have a look at the ford near the church and Groton Wood in the next village. Feel free to join me.

Wildflower to look out for: Early purple orchid – April/May.

In a big change from the weather we had become used to, the sun shone on the East 25 at Bressingham. The winner was John Dupen from Ringsfield near Beccles on his Roberts updated with three carbon tri-spoke wheels. John covered the Bressingham to Thetford and back course in 1:12:51 with Adrian Perkin on his ex-Alan Shuttleworth Longstaff second in 1:13:22.

Thanks to Mick Madgett for his work – not just as Event Sec, but helping with the timing, result board, collecting the roadsigns and no doubt other aspects not immediately visible to us competitors.

Afterwards there was a short clubrun to Redgrave where no less than 19 of us had lunch at the Cross Keys Inn. 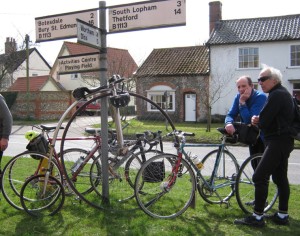 The photo featuring some of the wide assortment of machines outside the pub – including John Malseed’s penny farthing can be seen on the East Gallery of the TA Website, under the title “Wheels within wheels”. Adjacent in the East Gallery are Sian Charlton’s photo of John Dupen leaving the turn roundabout, and mine of Alan Nye leaving the car park with his Thompson trike hung on the back of his Austin Ruby. The personalities in the “Redgrave Green Conflab.” picture are (L-R) Dave Cannon, John Malseed, Adrian Perkin (hand on saddle), new regional secretary Roy Prockter , Andrew Nye, Ray Legg and publisher Adrian Bell.

The order passing the photographer is:

Ferg Muir, Alan Nye, Jim Montgomerie, Ian MacKenzie (looking at his flattening tyre), John Dupen, Andrew Nye (green vest), Pete Holland, Adrian Hills, Martin Badham (blissfully unaware his tyre is about to expire) and then John Malseed’s penny. I can only assume that Adrian Perkin flashed by in a blink of the photographer’s eye.

Clubrun after the 25 (around 10.15am) from Wortwell Community Centre Grid Ref

East Evening meet at the Butt & Oyster, Pin Mill. Grid Ref TM 205380.Pin Mill is the riverside hamlet of Chelmondiston, 6 mls SE of Ipswich on the B1456.

TA Camping at Bredfield on Saturday, plus evening meal nearby.

NB Don’t dismiss this if you are not into racing – it is a good socializing/camping/eating/spectating weekend, as well.

EAST: Fliss Beard 100 near Attleborough in conjunction with national championship on A11 dual carriageway.

Note that entries soon (20th April) close for Pete Holland’s 25 at Sleaford and the Mike Dixie 10.

(On a personal note, if anyone can give my trike a lift to either or both of these events I (Ferg) would be pleased to hear from you – otherwise I may be restricted to the Brompton folder)

Looking forward to drinking Loveleys Fair with you at Edwardstone on FRIDAY. (Loveleys Fair is one of the Mill Green Brewery’s beers)

And let me know you are coming, if you can