To TA East members and friends 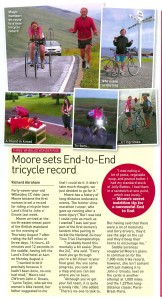 Here is a quick round-up of tricycle news:

There is still JUST time to buy CYCLING WEEKLY for Thursday 14th August …which has three-quarters of a page devoted to a article by Richard Abraham on Jane Moore’s  End-to-End record. But do be quick – this edition will be replaced on the shelves by a new issue on Thursday morning

The NEWS pages of TA Website, have, of course, lots about the record, and there is a brief summary for a wider readership on VeloUk at

The TA website NEWS pages also have a good account, by Martin Badham, and photos of our most recent meet at Halesworth.

Unfortunately there is a addenda to this

Alan Nye’s friend from Chelmsford “Mrs P” as he calls her, telephoned me at his request.

She had found him collapsed and the upshot is that he…..

Alan Nye sustained broken ribs in his tumble at Halesworth.

I gather he is at home and has just got to grin and bear it, but it can’t be easy for him at 83. He lives at “Glen Tilt” 45, Well Lane STOCK (between Chelmsford and Billericay). I’m afraid I do not actually know how you attract his attention if calling.

I did not see the moment of Alan’s fall – but we were riding in line ahead on the new cyclepath and had just dipped through an underpass beneath the Halesworth inner-link road. Just after coming back to surface level the path turns right and it was here that Alan came off, I suspect landing on a low brick wall bordering the path – about a foot high. He was riding his Kendrick-style (two wheels at the front) Newton trike conversion on a Scott frame.

He said he was just winded and decided to go home. Members helped him load the machine into his camper-van and he drove off.

Our very best wishes to you, Alan.

If you would like A more leisurely view of cycling Lands End to John O’Groats (than Jane Moore was able to take), see the blog set up by TA East members from Tiptree Les King and Gill Adams at:

Has interesting views and originally thought out photos

Les and Gill set off on Saturday 16th August, well equipped….. but leaving a wheel behind. I see today’s message mentions that they look like taking longer to get out of Cornwall than Jane took for the whole trip.      We wish Les and Gill… All the Best

MILDENHALL RALLY is very early this year – it opens in 4 days time.

See https://tricycleassociation.org.uk/mildenhall-rally-programmes/  for details of the TA Programme

His trike is very poor; it is not an Ephgrave frame; rear end is okay….If you could advertise it for around £75 .  There is also a Higgins conversion axle with support stays missing – you could advertise this around £45. Contact John – in Dedham – at jpmvictor@hotmail.co.uk  01206 323334.

Best Wishes to you all