SLEAFORD,   DUNSTON and BEYOND – THIS WEEKEND

Silk Willoughby Village Hall near Sleaford is just the right size for the HQ of a tricycles and classic bikes time trial and is always filled with chatter before and after the TA East 25 at the start of the Mayday Bank Holiday Weekend.

Whether you are interested in racing or not I heartily recommend looking in and having a tea and a cake at this, perhaps the TA East event most accessible to the Midlands and the rest of England, the village being just off the A52 and the A15.

On the following two days trike interest moves just a little north for the weekend at Dunston, a good base for the TA NE Mike Dixie 10 just across the Humber Bridge.

PETE HOLLAND tells me that people will be arriving at Dunston from midday Friday.

The Saturday event hall will be open from 12 noon (Silk Willoughby VH, two miles SW of Sleaford postcode – actually of the nearby pub – NG34 8NZ)

First rider is off at 2.01pm. A shortened version of the start sheet is at the end of the edition.

…..there is a ride out to Bardney Heritage Centre.

I was about to tell you about medieval Bardney Abbey, when I fortunately checked the Heritage Centre out and read:

…… a diverse Industrial Heritage. From the canning factory of Morrells to the Beet factory of British Sugar, Plus the workings of the railways, the river lock system and the local agriculture.

So it is much better rooted in the local landscape.

To boot it is run by cyclists and scores very highly on TripAdvisor.

If any of you live to tell the tale – please reveal what this is.

Also included are Nocton (where you can see if you can spot remains of the Lincolnshire Potato Railways ) and the cycle path to Dunston.

Sunday evening meal at the Red Lion, Dunston …… to be selected from Menu available at Stepping Stones on Friday.

Our most recent meet was at

With four tandem trikes at the start, mere solos were firmly outnumbered.

After eating round a big refectory table at The Bakery local riders led us to the church with it’s all-round Victorian decoration and deep-coloured stained glass windows. Coming in from the morning light we could hardly see a thing. So attached is my flash photo to show what you may have missed 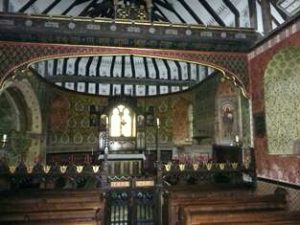 We had barely stepped inside when there was a gasp …..

“The floor has just been washed”

The back half of four tandem trike pairs retreated immediately – to be rewarded by finding a shepherd in the field opposite who showed them his hut with new-born lambs in need of special care.

The clubrun returned past The Bakery, collecting Ian Mackenzie who had been delayed by 20 miles of headwind. Riding past the Victorian rector/artists private chapel attached to the former rectory, the Tiptree Jambusters guided us to what they described as the Essex mountains, promising us a view of the Blackwater estuary spread below – which amazingly proved to be broadly as promised.

Time was now getting on – but as the route to Maldon was almost all downwind and gently downhill – and we had a local pilot on board – the miles melted away.

Arriving in Maldon we were shown the way to The Hythe without climbing the hill.

At a path only JUST wide enough for the TTs we sent our retired transport policeman ahead to control oncoming traffic and arrived safely outside The Queen’s Head.

A tapping on the window revealed Tom Fogg from Sunnyhill and Paul Willsher – the latter having ridden 60 miles from Leiston to be with us.

We arrived perfectly in time to slide into the table with the best view in the house – looking over the historic barges to the estuary and marshes beyond.

A lot later we went our different ways, with your captain eating his traditional ice cream on the prom before facing up to his duty and checking out a new Good Beer Guide entry (The Carpenters Arms, also recommended by Tom, for its suitability for TA Meets.

START on A15 at 2nd road gulley south of metal farm gate opposite Willoughby Road 1.2 miles south of Quarrington roundabout on A15 Sleaford Bypass. Proceed south along A15 through Osbournby to roundabout A15/A52 (4.2m) M. Take 1st exit, (care) direction Spalding and Boston over railway bridge at Donnington to turn (care) at (12.7m) M A52/A152 roundabout at foot of railway bridge. Retrace along A52 to Osbournby (21.20m) roundabout M taking 3rd exit (care) onto A15 direction Sleaford. Pass through Osbournby to finish at end of kerb 15 yards south of lamp post no 4, short of right turn to Silk Willoughby on A15, 652 yards south of the start (25.00m).

Silk Willoughby Village Hall will be open from 12.00. Take turn for Silk Willoughby on A15 (South of start). Proceed into village and turn left to village hall. No turbo trainers to be used as this is a residential area. Please be quiet and be careful to park so as not to inconvenience any residents. (For Sat Nav use nearby Postcode NG34 8PG).

Best Wishes to you All