Our Chairman and Lunch Organiser Martin Badham reminds us that on

Meet at “Sweetmeats” cafe above sweetshop in Water Lane, Lavenham (opposite kitchen door of “The Swan”) approx 10.30am.

For those wishing to park vehicles at the Manger, there will be a run to Lavenham leaving at approximately 9:00 am. Subject, of course, to the clemency of the weather.

For readers thinking of travelling to join us, and not familiar with these places there are some details at

Even in the sober pages of Pevsner,  “The Buildings of England”, Lavenham is described as

“Rightly celebrated for its timber-framed buildings and its church”, while The Manger, Bradfield Combust is “Late 15th century in its oldest parts”.

TA visitors have sometimes stayed at the “Travelodge Ipswich-Stowmarket” which is much nearer than its name would suggest – it is at Haughley  IP14 3PY. They currently have room-only double rooms on Saturday night at £42 the room.

Or one can go upmarket with various stages all the way to Lavenham Swan, opposite our elevenses rendezvous 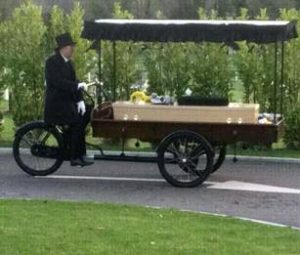 ALBERT GRAVENOR, whose death was reported in TA East E-News of Dec 5th, arrived in style at his funeral  – on a tricycle.

Thanks to Don Saunders for this photo of Albert coming up the drive to Cromer Crematorium.

Finally – I am currently reading an excellent newly-published biography :

WALTER RYE, who served as Mayor of Norwich in 1908 was a great enthusiast for his tricycles.

Here is how Kitching ends the 10 page section on Rye’s tricycling:

A photograph survives of Walter on his tricycle as an old man with a white beard and country tweed suit.  It is an apt testimonial to the role of the machine in keeping him alive and fit into his eighties: and this was a man who in his middle years contracted several successive life-threatening diseases and in later years grappled with other serious health issues including bad eyesight and heart disease. He wanted to be remembered above all as an athlete, but perhaps he should really be honoured as a (tri-)cyclist ! ”

Hoping to see you all at the TA East Lunch