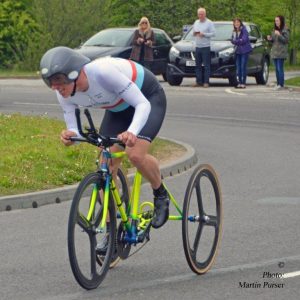 Provisional reports from Bank Holiday Monday morning’s North Eastern Region’s 10 mile time trial, held in memorial of Mike Dixie, are that Olympic track cyclist has swapped his mount for the more stable machine and hacked 1 minute 21 seconds off of Barry Charlton’s 10 mile Competition Record, subject to official confirmation. Adam thanked Marcus Hopkins for the loan of his machine to ride, will we see him rewriting the record books in the near future? Second place went to Gavin Hinxman, with 21:24, third was Carl Saint – 22:45. Handicap awards go to Jane Moore (20:25); Gary Wright (20:30) and Ian Pike (20:35). In the twicer event, Hoard and Becky Lewis were fastest in 18:45; Jon Surtees and Alastair Wareham (19:06) second and Simon and Cliff Beldon third (20:42). Fastest tandem trike were Andy Newham and Peter Holland (23:47).

A blog from Adam and his experience on three wheels can be found on http://www.adamduggleby.com/?p=263

It was a fairly still morning for the 10, compared with the Eastern  Region’s 25 held further south near Sleaford on the previous Saturday where Ian Pike continued his domination (until this morning) of the result board with a winning 1:05:02 which also gave him the medal for First Handicap. Gary Wright finished second with 1:10:07 and second handicap. Those staying at Peter Holland’s for the weekend “enjoyed” a clubrun on Sunday battling with strong winds and frisky cambers on their way to Bardney Station Café for a splendid second breakfast and visits to the Penny (1d) in the slot loo. We then paused en route back in Nocton to visit their Beer Festival.