We gathered at Worzel’s, a Farm Shop with a huge café set in the Fens, just off the A47. Ferg and I arrived to find Les and Jill unloading their tandem trike from the mobile home, shortly to be joined by Shelton and leader Mike Moody before heading for the coffee. There we were joined by Peter Hopkins, son Marcus and King’s Lynn clubmate Fred, who is cutting his teeth on one of Marcus’s barrows. Hunger and caffeine levels satisfied, we left Walton Highway to trundle past the orchards, comparing the old ones with the new closely packed ones. We arrived at West Walton, whose church nave was washed away during colossal floods, to be rebuilt some way from the surviving tower. 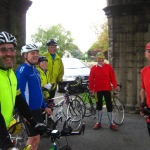 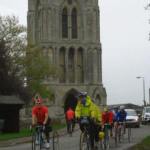 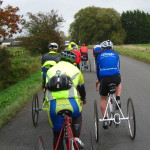 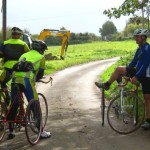 We clustered under the tower for a photo opportunity before turning north-east  for the Walpole’s Sts Peter and Andrew, almost grazing the A17, through the Tilney’s to Wiggenhall St Mary for an excursion up the track to inspect the church. Shelton and Marcus sprinted up the road to the St Germans for some bartering and we picked them up as we trundled through a little later. Our last Wool Church was the ruined one at St Peter, nestling several feet below the water level of the adjacent dyke before leaving the Wiggenhall’s for lunch at Watlington where we met Paul Willsher, no trike for medical reasons, who provided valuable assistance to Marcus whose block had unscrewed to create a solid axle. As Marcus was very close to home he switched to two wheels in preparation for the afternoon ride with his club.

Well fed, the remainder of us headed across the Fens through Wiggenhall St Mary Magdalen and Tilney St Lawrence to Worzel’s for a bite and a sup prior to heading back home. A splendid day awheel in the Fens with no need to reach for the gear change except when climbing the bridges over the A47.

Thankyou Mike for another glimpse of your backyard.