Latest information
Ferg held another morning’s bash through the Suffolk fords.
As I was stocking up with provisions at Rickinghall Farmers’ Market, and encouraging the lady baker to try a trike, I missed the earlier parts of the day. Meeting was at the Museum of East Anglian Life at Stowmarket, followed by a ford. 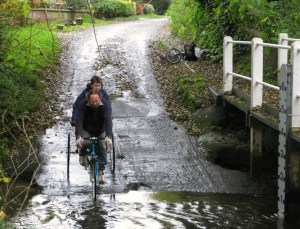 The ford pictured is at Great Ashfield. I got there shortly before 12, took some photos, crossed and re-crossed the ford and repaired to The White Horse in Badwell Ash.
A fine inn with solid walls and tortuous passages, when I arrived the bar was empty except for the bar-maid, peeling spuds. She served me with a pint and I sat awaiting the others.
They came in, in dribs & drabs. First was Dave Huffey, followed a short while later by Alan Austin who explained that the others were in the car-park mending punctures.
Eventually Ferg, Andrew and Jane and Graham arrived and we could settle down to some lunch.
A convivial time was had and we exited the pub in brilliant sunshine and drizzling rain. We were rewarded by a rainbow a little later as Ferg and I sped with a howling tail-wing back to Diss. Due to an imminent change in parking fees and the machines being calibrated in readiness, parking on Saturday was free. No complaints from me there.
Dropped Ferg off on the outskirts of Norwich then home to clean a pair of shoes, iron a shirt and grab a bath and shave in 45 minutes. Then drive over to the Club Dinner near East Dereham.