A report from Gavin Hinxman 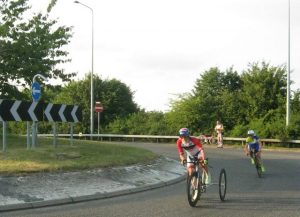 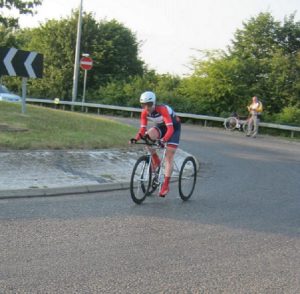 Four trikes entered the CC Breckland 15, near Norwich last week, all with a desire to set some records for this newly recognised TT distance.

Gavin Hinxman, Drag2Zero,  was the 4th trike, tackling the distance for the first time on 3 wheels

The weather was hot, the wind offered a little cooling breeze on the return leg.

The road surface was pretty bad with some major pot-holes. Two of the two-wheeled riders both ended up walking following failed bunny hop attempts.

Pete was first to finish with 46.29, despite stopping on the course to retrieve a dropped inner tube

Then came Andy, Andy knowing that if he beat Carl Saint’s mid 36 from the Yorkshire 15 earlier in the year and if Gavin (5 mins behind) didn’t catch him, he could take over the National Record.

Lez young completed the distance in 39.27, giving the Lincoln Wheelers a combined time of 2hrs 1min 35s, to establish a new 15 mile team comp record and something that they plan to better later in the year

Photos by Martin Badham, who apologises for missing Lez and Gavin with the camera due to a shortage of hands.