It is with great sadness the death of David “D 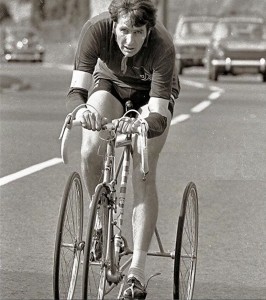 uffers” Duffield has occurred on Sunday 21st February after a heavy Fall!

His tricycle progress started I believe with the Beacon RC, with Victory’s and Records fall to him. From 1956 the TA annals start listing his progress, the Tricycle Trophy (12 Hrs), Major Lilles Trophy (1959), H.W. Bartleet (1959),to name just a few!

A trawl through the RRA Annals will also show his ability, Place to Place up to and including Lands End John O’Groats. Even more unique is the fact that he rode it both ways? North to South is considered a poorer option, but Duffers did it anyway!

He thought it should be warmer as he reached Lands End?

His attack on the Cardiff – London record was well reported in the cycling press.

When he planned the attempt in 1971 he was after Stan Spellings Time, but just a week before Tony Pell nipped in and improved the figure.

Well David set off an hour after Phil Griffiths, who was after the bicycle version, weather not great but here goes nothing! Well, he took 11 minutes 45 seconds of the new time.

After his trike exploits stopped his work for cycling did not, working for Moulton, Raleigh, and Halfords he did well.

But many folk who know little of all that went before will remember him for his commentary duties on TV and at events, especially his wonderful service with Eurosport International.

All who followed him during Tour de France coverage will have the favourite “Duffieldisms”, moments or minutes when he went very “Off Piste” as far as what was showing at the time!

But that eventually ended. Morned by many audible sighs of relief by those who didn’t find him their cup of Earl Grey?

He was also a long standing member off the “Pickwick Bicycle Club, along with a few other trike luminaries, hence the ever present Straw Boater”.

Thanks are due to Bob Nolan for the text and Keith Harrod of “Legends of the RTTC” for the photo.