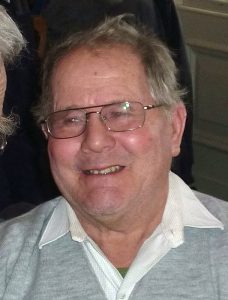 Known to most of us as Chuff or Chuffey, East Region member David Huffey, died on June 6th.

Chuff’s funeral will be at

COLCHESTER CREMATORIUM ON FRIDAY 23RD JUNE at 11AM

The family are arranging a gathering afterwards, details of which are not yet fixed.

They are very keen that Chuff’s tricycling friends should attend

The Crematorium is on the B1025 Mersea Road, to the south of Colchester town centre. The postcode is CO2 8RU and the National Grid Ref TM 002236

He belonged to Colchester Rovers until 1982/3, later joining the Diss & District Wheelers…..as opposed to the then sponsored Diss CC /Huret.

1991 was the year he successfully completed the Paris-Brest-Paris Audax.

He lived at Daisy Green, near Lexden Heath and Marks Tey, for most of his life.

Probably the last major TA event he attended was the TA Thames Valley 60th Anniversary Lunch near Tring in February 2013.

Fairly soon after that his Alzheimer’s became too much and his family helped him into the first of several care homes in Colchester. I believe he was 85 when he died.