So at my second competition I won Gold but then the competitor who beat me in the first one had to go home to Germany (so I was only racing one Argentinian girl, who was significantly slower). Instead I made it my goal to beat the male trike closest to my speed and got a beautiful sprint finish out of it in the end so I felt I had earned the medal in some way. In the TT I just wanted to match my average speed of 30kmh that I set in the first TT, despite it being ~4.4km longer. I was less than 0.1kmh off my target at ~29.9kmh. Every race was just a brilliant experience, I’ve never been in so much pain but so in love at the same time! Very lucky to have managed a place on plane to this season’s first world cup in 3 weeks, again in Italy- I’m the only 3-wheeled development rider they’re taking out of 5. If last year’s first world cup is anything to go off of I should be competing in a field of 7-10 female trikes in my classification. If each classification has ten trikes that would be me I’d be racing amongst 40 trikes. That’s like a trike Tour de France!
Here’s the race report of the last one. Apologies for my face in the picture they used! At least it shows a pretty GB trike.
https://www.britishcycling.org.uk/gbcyclingteam/article/20150505-Great-Britain-Para-cycling-Team-at-the-Brixia-Para-cycling-Cup-0

Here’s a picture of my sprint finish, attached. 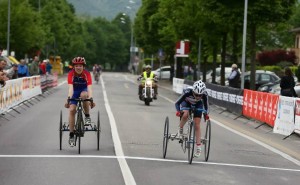 2 Comments on Hannah gets Gold