The stable layout of a tricycle (at low speeds anyway) makes it an obvious candidate for load carrying – and tricycles have been put to this use since Victorian times. The most familiar use of carrier tricycles is the “Stop me and buy one” tricycle that was most extensively used by Walls Ice Cream. Tricycles are still used for this purpose today. However, the uses found for carrier tricycle over the years have been many and varied and this variety has been reflected in the designs of the tricycles themselves. 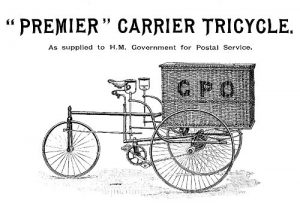 The Premier carrier tricycle of 1886 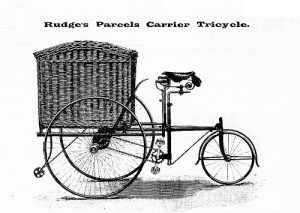 A Rudge carrier tricycle of 1889

The layout of Victorian carrier tricycles tends to reflect the design of ordinary tricycles of the period with large driven wheels and often steered by twisting a handle. Both the examples depicted above show these features. The Premier of 1886 has its steered wheel out at the front; the steering link comes back to a rack & pinion mechanism on the handle. The 1889 Rudge reverses the layout with the driven wheels at the front and the steered wheel at the back. 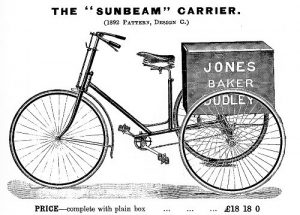 ‘Spartan’ tricycles from the
East London Rubber Company
catalogue of 1939

Carrier tricycles quickly began to take on more modern forms and the 1902 Sunbeam in the picture above has the equal sized wheels and front wheel steering that is familiar to today’s tricyclists.

Mainstream carrier tricycle design settled down in the years leading up to World War 1. This ‘standard’ design featured a box at the front, flanked by two wheels, with a single driven wheel at the back – a basic design that has remained in uses ever since.

There are two variations on this design, and these involve the method of steering. On some there is a vertical steering head immediately behind the box. A drawback to this arrangement is that it moves the centre of gravity towards the outside on a corner. The second, and better, arrangement is to extend the cycle frame under the box to a pivot in the centre on the front axle. Although this arrangement is more stable, it is also more expensive to make.

The accompanying illustrations all come from the East London Rubber Company’s 1939 catalogue and show a range of tricycles of both types: the ‘Spartan’ range pivoting behind the box while the ‘Duros’ & ‘Defiance’ pivot at the axle centre.

The prices reflect the additional expense of the steered axle: although the ‘Defiance’ and ‘Spartan’ are of similar quality, the ‘Defiance’ costs over £2 more. 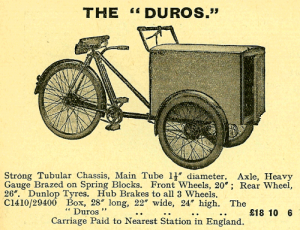 ‘Duros’ tricycle from the East London Rubber Company catalogue of 1939 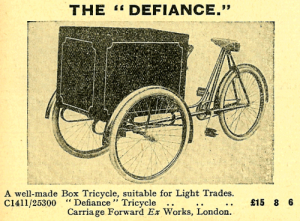 ‘Defiance’ tricycle from the East London Rubber Company catalogue of 1939

Not all manufacturers stuck to the standard layout and the Perry ‘Easy-Steer’ (below) shows a tricycle with individually steered wheels. This is a far better arrangement than either of the standard construction methods. This improvement comes at a price, however, and there can have been very few tradesmen willing to pay an extra £10 for the pleasure of making their delivery boys’ lives that little bit easier. 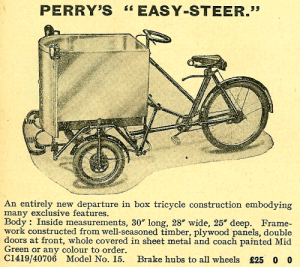 James was another manufacturer that went for the Ackerman steering layout. 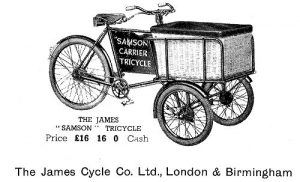 Another ‘non-standard’ approach was made by New Hudson during the 1930s. This has the layout of an ordinary tricycle with the two driven wheels at the back and incorporates a number of innovative features. The massive-looking frame uses a combination of tubular and channel-section members and the whole lot bolts together instead of being brazed. The pipes visible on the rear of the chassis allow the axle bearings to be greased from a set of conveniently arranged nipples on the rear chassis member. 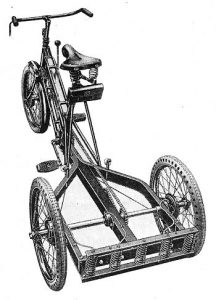 Despite these attempts to break away, the standard layout of box tricycle has remained supremely popular. 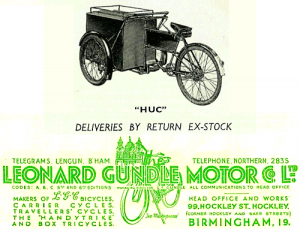 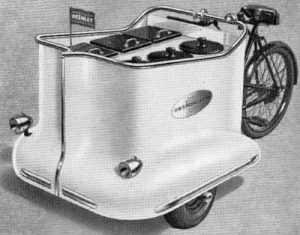 And finally, if you were thinking that the subject of carrier tricycles is a little off-topic for an association that has racing as one of its main activities, “it ain’t necessarily so”… 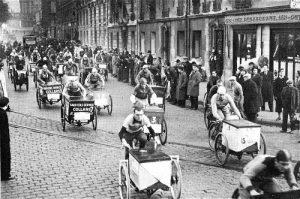 La course de triporteurs: a regular event in Paris in the 1930s