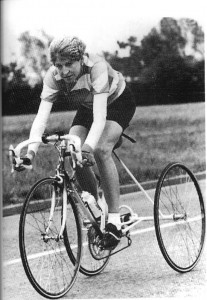 How does one start to write about FELICITY BEARD, a very close friend and Club-mate? So tragically taken away from us while doing what she enjoyed most, riding her trike, a young woman in the prime of life whose dedication and determination in her love of tricycle riding, be it touring, riding randonneurs, or breaking National Competition Records, should be an inspiration to us all.

In the few years I had known Fliss, I saw her graduate from riding a lady’s cycle with straight bars to become one of the top tricycle riders in the country.

Everyone who met her will remember her for her love of life; bubbling personality, and willingness to talk to people – people she had just met or old friends.

Fliss was a rider who rode all over the country, not just local events, so she fast became a well-known figure on our roads. Her records on tricycle for ladies, 30 miles, 50 miles, 100 miles, 12 hours and 24 hours are positive proof of her ability. (Also Ladies’ Tandem Tricycle ‘25’ with Kate) She also held the 10 miles Mixed Tandem Tricycle National Competition Record with myself as her stoker. We have competed on tandem trike together many times in local and TA events, and this I shall sadly miss.

Of all her exploits on trike I think the ones that gave her the most pleasure were riding and completing the Paris-Brest-Paris and a 1 2 hour event in Switzerland which she rode twice, first time on the long barrow with husband Dave, second time on solo trike.

Sunday, 9th July was a sad day for us all, tricyclists and cyclists alike, leaving us with a feeling of deep sorrow but also many pleasant memories.

On Friday, 14th July many friends from far and wide joined club-members from Doncaster Wheelers, relatives and family at the little church in Sykehouse to pay their last respects. A further service at Rose Hill Crematorium, Doncaster, was attended by even more friends.

Fliss has gone from us, but will be forever with us.

Whatever we may have achieved or done in the region this year it will go down as a black one with the tragic loss of Fliss Beard in July. She had been with us in the sport for a comparatively short time but had already immortalised herself by stamping her mark on the record books and our hearts in no uncertain manner. The large turnout at the funeral with members from not only the TA and her own club, Doncaster Wheelers, but also the 24 Hour Fellowship and Audax UK served to emphasise her wide-ranging enthusiasm in cycling. Our loss is great, Dave Beard’s loss we can only imagine. Her initials were FAB and she surely was. I last saw her at York Rally where she chaired a committee meeting, none of us realising it was to be her last official duty.

The May Wood Trophy 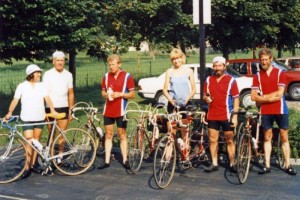