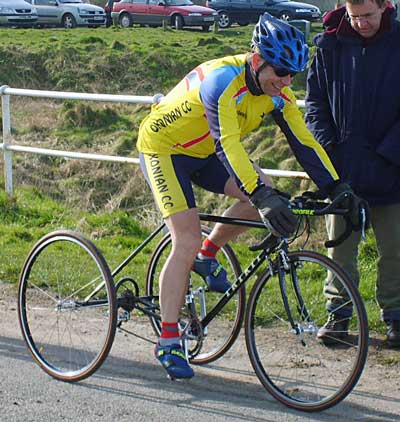 In 2005 I was asked to design an axle for André van Bosbeke in Belgium. He wanted to build three trikes for a racing team to take part in the 2006 Tricycle World Championships that he was organising. The finished machines are a tribute to the youngsters and Jurgen who built them. They all have Trykit axles, cassette bodies and wheel hubs.André and his team are now busy making more machines with Trykit 2 wheel drive cassette bodies and hubs.I also designed and produced a complete one off tandem trike axle for a frame builder in Kent. This had two disc brakes and special two piece hubs, so that the wheels can be removed without disturbing the discs and callipers.In November 2006 I went on a frame building course to learn the finer techniques of brazing. It was a terrific course where I learned far more than the skill of handling a gas torch. I came away with a beautiful new racing trike frame made to my own design.The main frame is in Reynolds 853 tubing. It has a wider axle than normal (4″ wider than my Jack Taylor) 26″ wheels and a bottom bracket height of 8.5″The complete axle assembly is my own and was taken to the course to be brazed to the new frame, also my own design.I made the front and rear hubs and built the wheels using Sapim CX ray bladed spokes. The gears and chainset are 10 speed Campagnolo.With just over 130 miles on the clock, initial impressions are good, but I built it mainly to race in criteriums so time will tell if I’ve got it right.With the new machine now finished and on the road, and I have designed and made a new frame building jig, and the various other smaller jigs and fixtures necessary to build frames and forks in my own workshop. I am currently working on a lugged bicycle frame for my wife, and will follow that with a tandem trike for the two of us.When finished, these three machines will be on display for any one interested in a new frame or complete machine.Geoff Booker.Further details can be found on Trykit’s website: www.trykit.com