Latest information
TA members will sorry to learn that Jim Staines (Mildenhall CC) has died, after a long period of poor heath.  Although in recent years Jim and his wife Vera (who was TA  National Time Trial Secretary 1992-2000)  spent most of their time in Holland, both were at Mildenhall Rally last month to see their grandson Matt Cook racing on the grass and to support their daughter Mandy Burchett  who was part of the organising team 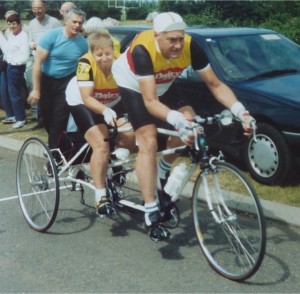 Here are Jim & Vera on tandem trike  being pushed off by organiser Roger Sewell at the start of the 1992 North Road 24 hour.