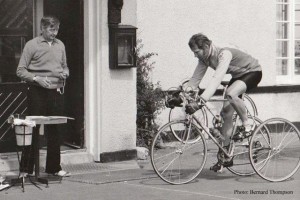 It is with great sadness that we have heard of the death of TA North West Region member Joe Summerlin.

Among many things Joe was a timekeeper, a member of the National Committee of CTT, and a frequent organiser of events from National Championships downwards. His positive, authoritative but warm hearted manner will long be remembered.
It was good to see Joe and Gail at the recent National Reunion, a function they had often been unable to attend due to earlier clashes with the RTTC National Hillclimb Championships.
He was in his eighties but still  a regular at the Mersey Roads 24 hour.  When well past 70 he was still racing his trike – doing, for example,  1:25:51 in the 2005 Stan Spelling Memorial 25.
Joe had a major heart attack on the 3rd December and died 10th December.
Our  thoughts go out to his wife Gail and their family
Joe Summerlin’s funeral will be held on 6 January 2016 at Bramcote Crematorium (NG9 3GJ) at 2.45pm.  Afterwards at The Risley Park Hotel, Risley DE72 3SS.
Family flowers only, donations, provisionally, to the British Heart Foundation