The Rally is dead, long live the Festival!

Mildenhall Cycing Club reopened their weekend of cycling at West Row, a village a couple of miles outside Mildenhall. It was based on the village hall and back in the three day format after last year’s one day trial.

The Tricycle Association gathered in Barrow Loke, in the close vicinity of the village hall and refreshment vans. Mark Burchett told that they had hoped for four such vans but only two were in action. They did good trade. 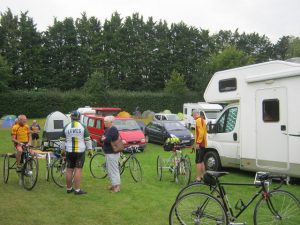 With the Festival opening on Friday afternoon, most activity was concerned with erecting tents, organising evening meals from the nearby fish and chip shop and pizza emporium. A visit to the nearby pub at Judes Ferry was fitted in.

On Saturday, the traditional ride to Prickwillow Pumping Station for elevenses, followed by lunch at Isleham church hall had eleven trikies on it. Several others rode one of the Audaxes with 50, 100, 160, 200 or 300 km distances to suit all tastes. After a little light rain over breakfast, the weather turned fine and stayed that way all weekend. Was this really the Bank Holiday? 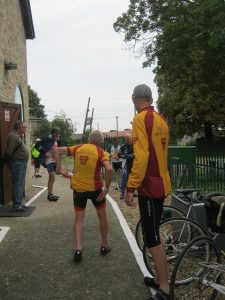 Hon. President and his good lady, Geoff and Liz Booker led Sunday’s club run to Bury St Edmunds, involving rough stuff across Cavenham Heath National Nature Reserve – which was met with varying levels of enthusiasm. Back on the black stuff, we rode past West Stowe Anglo Saxon Village into Bury where we parked up the trikes and sought places for lunch.

With everyone gathered, once more, we left to ride to Barrow for obligatory photographs before heading north to West Row. Two teams of six were entered in the Festival Quiz in the evening. TA2 winning with TA1 coming equal sixth. 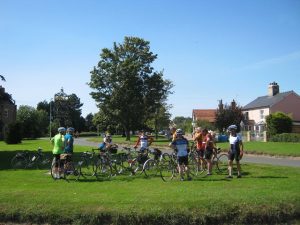 Monday morning saw seven trikies heading for the Red Lodge Transport Café for the traditional breakfast, then returning to the Festival grounds to enjoy the Trade Tent, Grass Track Racing or catching up with friends that one hasn’t seen for a while. Some of the further travelled began to set off home, including your scribe, who may live only 60 miles away but was riding back in unaccustomed warmth.

Altogether, the Mildenhall Festival was, I felt, a big success. There may be a few lessons to be learnt, as with any new venture, which it is in the new format. Hope to see more of you next year.