The news reached us today that Terry Anderson, a keen tricyclist 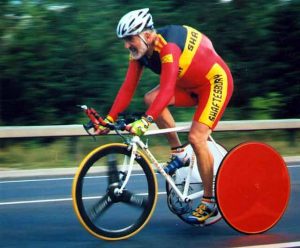 , passed away yesterday morning. He collapsed at home but died while efforts were being made to bring him out of a coma. Terry was a leading figure in the London East District and Eastern Counties Cycling Association, organising the Shaftesbury CC ‘Uts Audaxes for many years. 13 parts of Terry  are  to be donated to help others.