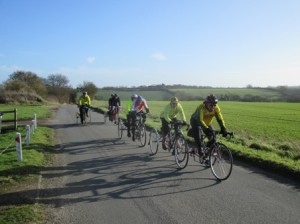 The Annual Luncheon was held on 2nd February and the Aperitif Ride left the Manger car park in Bradfield Combust shortly after 9:30 in bright sunshine, heading through the lanes with a trio of short barrows and a trio of long barrows, one of which appeared in the ‘For Sale’ columns herein a short while ago. It was on it’s maiden voyage with the new owners who managed very well with plenty of advice being given. We arrived at ‘Sweetmeats’ in Lavenham where a large party from Essex were in residence, Mark Brooking and family, Jane Swain and Peter Faulks. Also there were Bill Ives, celebrating his birthday and a couple of non-cyclists who seemed to enjoy the entertainment. We were soon joined by Dave Cannon and Mick Madgett, riding down from the northern parts and Greta and the Hollands who arrived by car. The poor café owner was rather swamped by 20 tricyclists but after a bit of harassment he admitted to appreciating the custom.
Suitably refreshed we set off, after the chairman had re-inflated his front tyre to ride back by mostly the same route. Although a split in the pelotan caused a few to take a different route back to the Manger, we all arrived in time to order our repasts and settled down for a mardle (Norfolk for a good ol’ chinwag) before the young ladies started served up the food.
The raffle took place between the main course and the sweet but when all the crockery had been cleared the awards were presented – The Jack Covington Shield for the Autumn 25 and a clutch of medals to Chris Hutchinson and the Ron Fisher Cup for the greatest mileage by an Eastern Region member in the TA Annual Mileage Charts to Martin Badham, who believes that there are other members hiding their lights under bushels. The sun was still shining brightly when we emerged and after fond farewells, started to head home well fed.