Most may well have heard about this already.  In brief, Highways England has published a proposal for a Traffic Restriction Order (TRO) to ban cyclists from the A63 near Hull.  I attach a copy of the proposal and statement of reasons in support.  Objections to the proposal must be received by 19 February. 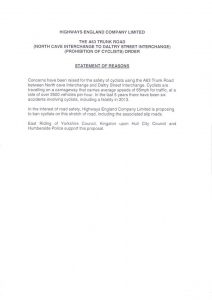 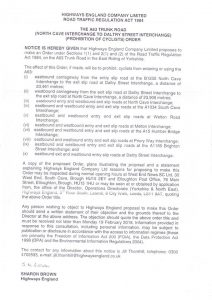 The Statement of Reasons given in support of the proposed TRO is:

Concerns have been raised for the safety of cyclists using the A63 Trunk Road between North Cave Interchange and Daltry Street Interchange.  Cyclists are travelling on a carriageway that carries average speeds of 65 mph for traffic, at a rate of over 2500 vehicles per hour.  In the last 5 years there have been six accidents involving cyclists, including a fatality in 2013. should we state that the cyclist rode into the back of a stationary caravan – not necessarily stating the obvious?  It could be seen as a sensible objection perhaps?

In the interests of road safety, Highways England Company Ltd is proposing to ban cyclists on this stretch of road, including the associated slip roads.

The stretch of the A63 which would be affected includes the entire course used for the ultra-fast 10 course, the V718 and all its derivatives.  If the TRO is put in place, that would mean the V718 would cease to exist as a course and no more events could be held on it.

CTT does not accept that on the days and at the times that time trials are held on this stretch of road that the figures quoted by Highways England accurately represent the correct position.  CTT does not believe that the V718 course represents a danger to cyclists or that time trials held on this course are not safe.  The six accidents referred to are not all accidents in CTT events.  That is the total number of accidents involving cyclists over the last six years, which is not statistically significant.  That should be compared against a recorded number of 297 accidents over the same period on this stretch of road involving motor vehicles.

This proposed ban on the A63/V718 is not just about time trialling however.

A Highways England’s spokesman has stated that cyclists are to be banned because they cannot keep up with the flow of traffic.  (However, the proposed ban does not extend to horses, milk floats, walkers etc).

Cyclists cannot keep up with the flow of traffic on ANY road out of towns.  This may set a dangerous precedent.  If Highways England succeeds with this ban, it will be far easier to ban cyclists from other roads deemed too busy.  This may well have long term catastrophic implications for cycling in all forms.

Please could you forward this email to all clubs in your District and ask them if their club members are each prepared to lodge an objection with Highways England?

Also, if the District Committee members could each lodge an objection, that would be very much appreciated.  The concern is not just potentially losing this course, but that Highways England may seek to put in place similar TROs for other roads.  As Highways England is responsible for all trunk roads in England, the potential ramifications are considerable.

If you wish to object to the proposed TRO, please could you put your objection in WRITING (Highways England has not supplied an email address for objections to be sent to, so objections cannot be made by email) and POST it to The Office of the Director, Operations Directorate (Yorkshire & North East), Highways England, 3rd Floor South, Lateral, 8 City Walk, Leeds, LS11 9AT.   The objection should quote the reference ‘The A63 Trunk Road (North Cave Interchange to Daltry Street Interchange) (Prohibition of Cyclists Order)’.

Objections MUST be received to the above address not later than Monday 19 February 2018.

Any objection must be based on the proposed ban on cyclists using the A63.  An objection based on the fact that it is a fast time trialling course would not have any merit and would very likely be disregarded.

If you do wish to lodge an objection, you may wish to begin this as follows:

I write to object to the above proposed TRO.  Please respond confirming you have received this objection and respond to the issues I have raised below.  Additionally, please inform me of the outcome of this consultation and of any future amendments to this proposal.

The grounds of my objections are:

Then please give details of your objections. Suggested objections are listed below, although if you wish to object please add whatever objections you have of your own.

Highways England has an obligation to respond to ALL objections received and must respond using the same means by which you contacted them (ie. by letter).  As such, please ensure that when making your objection you give details of your name and address.