ON TWO WHEELS IN FRONTBy Alf LayzellPrinted in the Association Gazette Autumn 1957.“Since 1867 the tricycle has passed through every conceivable phase of design. By 1866 the three tracked machine with steering wheel in front and driving wheels in rear began to show its superiority over other designs and within eight years this type, known generally as the “Cripper”, became almost universal with regard to wheel arrangement, although there was still a difference in method of drive, some makers using Starley’s balance gear and others the double free-wheel clutch. 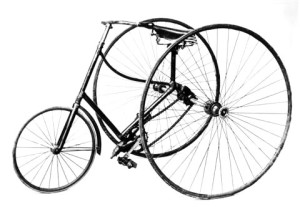 The wheel arrangement in common use today results from the survival of the fittest. The first 25 years of tricycling history was a period of strenuous competition between mechanics, engineers and designers, some of whom were men of genius. The battle was won by the “Cripper”. In view of the foregoing it is surprising to the present writer that letters appear in the “T.A. Gazette” from correspondents who seem to think that the tricycle with two wheels to the front never had a fair trial. It did get a fair trial and was beaten. Two machines with two wheels in front were very successful. Both could be easily converted to tandem form. The Olympia tricycle, once the fastest vehicle on the road in its tandem form, was steered by means of the two front wheels controlled on the Ackerman principle. This necessitates the use of a track rod steering arm to give a different degree of obliquity to the wheel when cornering. It was patented by Rudolph Ackerman in 1823 and was first used on steam coaches. Ackerman admitted that the idea had been communicated to him by George Lenchenspurger of Munich. The driving mechanism of the Olympia was the same as that on the Rover Safety bicycle.The Humber tricycle had the two driving wheels in front. Those were mounted on a balanced geared, or differential, axle. The machine was steered by the back wheel. In its single form the Humber was the favourite among racing men, but it was tricky to ride. The “Cripper” ousted the other types because of it greater stability. On this type of machine the rider has some weight on the steering wheel all the time and is in a position to counteract the changes in camber and sudden reversals of the same by moving his body laterally. This fact enabled makers to fit equal sized wheels. In 1936 Bilbe of Reading built tricycles with same wheel arrangement as the Olympia, and with Ackerman steering.* The late H.W.Bartleet bought one in 1938. I was in India at the time and corresponded with him once a month. Being interested in the machine I asked him what he thought of it. He said that it was awkward to steer at more than 12 miles an hour.”*NB. This machine was undoubtedly a Kendrick Tricycle, made by The Kendrick Cycle Co. / K.H.Wilkins, Olympia Works, Albert Road, Reading. In 1946 the proprietor was H.S.Bilbe, the inventor of the ‘Endrick’ rim. The tricycle had AcKerman steering, hence ‘Kendrick’.The ‘Kendrick’ tricycle formerly ridden by the late Tom Norton is in the Cycle Museum at Llandrindod Wells. He rode the tricycle twice a day half a mile to and from his office until about eight months before his death at the age 85 in 1955.The ‘Kendrick’ tricycle was produced for the Government during the 1939-1945 War as a substitute for an invalid car.The 1951 Spring “T.A. Gazette” noted that, “H. Bruce Kingsford of Cheltenham, who at 82 still rides his Kendrick tricycle…may well be our oldest active member”. In 1953, in his 85th year, Bruce Kingsford had a ‘K’ type tricycle made for him by T. Higgins and Son Ltd. Details and pictures of this machine can be found on the Higgins page.(It is interesting to note that Alf Layzell does not mention the post war Harding tricycle with two small wheels to the front and Ackerman steering; or the ‘K’ type tricycle built by Higgins. However, it is thought that there were only three ‘K’ types built.)Contributed by: Martin Purser, Chris Hewitt, Paul Stevenson and Alf Layzell