For other events navigate using the “<” and “>” buttons. 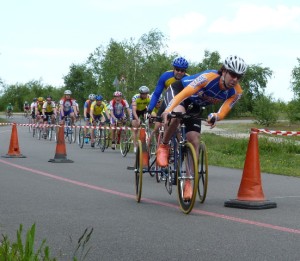 Photo supplied by Bob Nolan, fearlessly snapping in the face of oncoming barrows.

The Rules for the Tricycle Criterium League:

1. Only fully paid up members of the Tricycle Association are eligible to qualify for the League.
2. Events to qualify must be held under the rules of British Cycling, the British Human Powered Club, or under the aegis of an appropriate organisation and open to tricyclists only.
3. The League will be decided on a rider’s performances in eight criteriums from the full season. Method of scoring being 10 point first position; 9 points second position; 8 points third and so on up to ninth place after which all finishers will receive 1 point. In allocating points finishing positions of non TA members will be ignored.

When confirmed, the events will be listed in the Gazette and on the TA website.

This season, the league will again be run using the British Human Power Club (BHPC) schedule of events. These are held all round the country so most people will have the opportunity to have a go somewhere. They are held on close circuits which all vary in length and flatness. Races seem to last about 45 minutes to an hour.
Everyone is friendly and their machines are quite interesting to look at if you get time to look around. The quicker fully faired machines could be reaching speeds of around 40 MPH. Quite amazing to watch. There are 11 events in all.

The Betty Covington Trophy will be awarded to the leading member of the Tricycle Association in the Lancaster event on 22nd May 2022. In the event of an overseas member winning it, it will be held in the UK on their behalf.

How the BHPC racing works

No Licence or membership is required. So it is cheap to enter. Most events cost around £10 or £12 Just turn up at the venue and sign on for the race. Sometimes there are two races that you can enter, in which case the T.A. League result will be on the first race only. You can do the second for fun! If enough racers are in attendance there will be an event for the faster riders and one for the slower. ENTER the SLOWER section. Or you will get eaten alive! You will be racing with all manner of machines, but don’t worry, the field will soon thin out. You will be given a race number but not a body number. This you have to provide. You will keep the same number for three years. Your race number needs to be fitted so that the lap scorers can see it. AT THE FRONT of your machine. You can stick it on your helmet or your arm if you wish, but make sure it can be seen. So take along something to write the number on and a way of displaying it. Keep it for the next event. The scoring for the T.A League will be as per the existing rules with the following alterations. The races will not be run by British Cycling under their rules. There is no minimum number of tricycle riders required. If you are the only upright trike in the event you get maximum points.